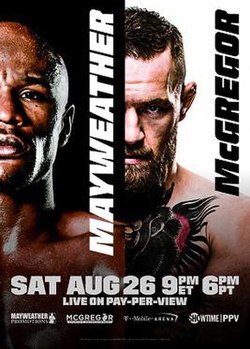 I keep hearing about this Floyd Myweather vs Connor Mcgregor fight, and I think Connor bit off more than what he could chew like the first fight with Nate Diaz.  Not sayin Mcgregor isn’t a good fighter just saying he needs to stay in his lane.  I remember the first fight with Diaz, everbody was saying he was gonna kill Diaz and Mcgregor got his ass whipped and finished in devastating fashion with Diaz passing his guard, mounting him, ground and pounding him, then submitting him with a beautiful rear naked choke!  I also remember just about every fight I seen him in the beginning he’ll act like he’s gonna tap gloves with his opponent and then take a body shot at them.  Wonder what he’s gonna do with a man who runs around the ring from punches lol.

In this article I have provided a Powerpoint presentation on a combat fighter’s nutrition with strength and conditioning workouts. Now Im not too sure what either camp is exactly doing but this will give u some insight on how a typical combat sport athlete would do.  I’m not too sure what either of these 2 jackasses game plan, purse, or training camp so I had to seek knowledge.  size=”large”]MMA SPORTS NUTRITION POWWERPOINTSLIDESHOW

I am interested in The Money Team’s sports medicine and training section because they boast one of the best trainers alive within the young, pretty and talented Courtney Watson whom also is the Head Athletic Trainer for the L.A. Sparks (WNBA).  A very true inspiration an I am a big fan of her on and off the big screen.  Ms. Watson began her professional career in 2005 directing the sports medicine staff in the NBA Development League (Anaheim Arsenal) and the WNBA (Houston Comets). She has traveled internationally conducting performance clinics with professional athletes in such places as Turkey, Korea and Italy. Caring for athletes and creating a solid foundation for developing optimal performance is a passion that exudes from Ms. Watson every time she helps athletes reach their maximum potential. Watson also helps out a lot of youth by providing an intern program in which she shows them the science and dirty aspects of the business.  Big ups to you Ms Watson!  Well im interested in seeing what this fight will bring.  Good training to all, and to all a good fight!!!

As stated on wikipedia

From Wikipedia, the free encyclopedia 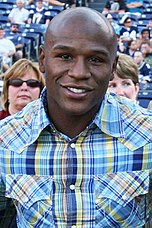 Despite his success in the UFC mixed martial arts promotion, Conor McGregor maintained an interest in boxing competitively again, and entertained the idea of a “money fight” with Floyd Mayweather Jr.[7] Mayweather reportedly talked to Freddie Roach to train McGregor for the fight in case it would happen.[8] UFC president Dana White dismissed the rumors of a fight with Mayweather on The Dan Patrick Show, stating that Mayweather would have to contact him since McGregor was under contract with the UFC.[9] White even went as far as stating, “Here’s what I think the chances are (of the fight happening): About the same of me being the backup quarterback for Brady on Sunday,” referring to Super Bowl LI.[10]In January 2017, it was reported that the two parties had entered an “exploratory phase” in negotiating a potential match between Mayweather and McGregor. On The Herd with Colin Cowherd, White openly offered to pay Mayweather $25 million to hold the proposed bout during a UFC event. He also predicted that pay-per-view viewership of the hypothetical bout could possibly rival Mayweather vs. Pacquiao.[11]

On March 7, 2017, Mayweather called upon McGregor to “sign the paper” and “make it happen”, arguing that “if Conor McGregor really wants this fight to happen, stop blowing smoke up everybody’s ass.”[12] On March 10, 2017, Mayweather stated that only a fight with McGregor would make him come out of retirement.[13] On March 16, 2017, Dana White backpedaled on his stance against a Mayweather-McGregor bout and said that he would not deprive McGregor in making a massive payday.[14][15] On May 18, 2017, McGregor reportedly agreed to all of Mayweather’s updated terms and signed the contract.[16][17]

IBF super featherweight champion Gervonta Davis will participate in a co-main event.[18] An international press tour was held from July 11–14.[19]

On July 19, 2017, additional undercard details were released.[20] To date, three names have been confirmed on the undercard, including British amateur boxer Savannah Marshall who signed up earlier in the year with Mayweather Promotions and Badou Jack who will be stepping up to fight at light heavyweight.[21]

On a July 24, 2017 episode of the Pardon My Take podcast, hosted by BigCat and PFTCommenter, former heavyweight boxing champion Mike Tyson predicted McGregor “is going to get killed boxing.”[22]

On July 26, 2017, it was announced that former welterweight titleholder Shawn Porter would be headlining the preliminary fight card on Fox Sports, facing Thomas Dulorme. [24] [25]

On August 4, 2017, Jamel Herring announced on his Facebook page that he would be fighting on the Preliminary Card on Fox. [27] [28]

In the United States, the fight will be televised via Showtime pay-per-view.[29] On July 10, 2017, it was announced that pricing for the PPV in the U.S. would mirror that of Mayweather vs. Pacquiao, being set at US$89.95 (with an additional $10 charge for high definition).[30] It was also announced that Fox Sports (the television rightshoulder of the UFC) would provide shoulder programming for the fight, including coverage of the press tour on UFC Tonight, as well as a pre-show and preliminary card (similarly to those broadcast by Fox Sports 1 prior to UFC pay-per-views) on Fox and Fox Deportes.[30] Sky Sports Box Office will hold rights in Ireland and the United Kingdom. Although it was initially believed that the price would match that of the U.S. PPV, the price was set at €24.95 (£19.95).[31]